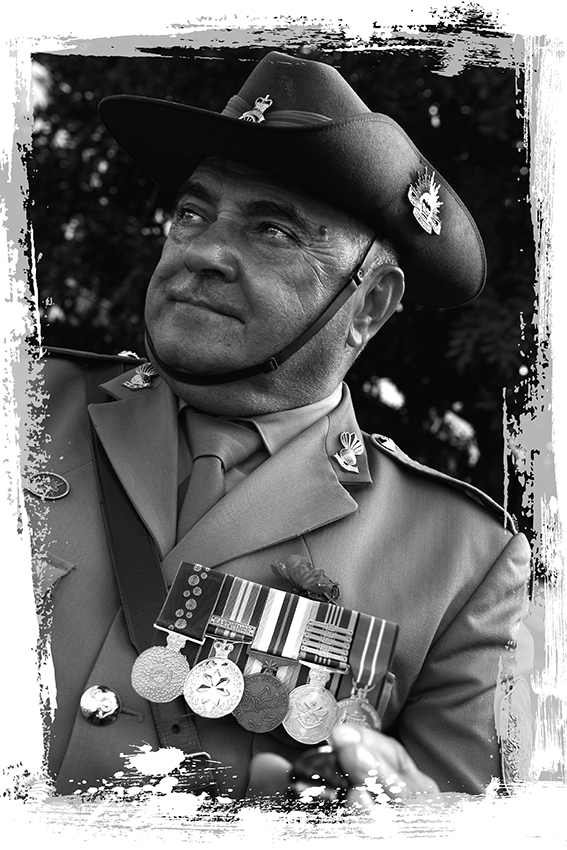 Warrant Officer Class One Colin (Col) Watego, OAM was born in Bangalow, NSW and was the eldest of a large family of 6 children; 4 boys and 2 girls. He and his family initially lived in Byron Bay NSW – where Wategos Beach is the namesake of his ancestors. While he was still young, the family moved to Mount Gravatt, the southern suburbs of Brisbane, Queensland. They lived in a 2-bedroom fibro home leased through the Queensland Housing Commission.

Col was educated in Queensland and whilst at school he and his brother Neil joined the Army Cadets. At the age of 20, following in the footsteps of many of the men in Colin’s family; in 1974 with his brother Neil Watego (12 months his junior), Col and Neil decided to Join the Defence Force (ARMY) and both enlisted into the Royal Regiment of Australian Artillery (RAA) on the 3rd September 1974. The generational linage of men in Colin’s family who had also previously served included: his father – (Col Watego Senior – WW2); his uncles (his father’s brothers – Vince Watego who died in the Defence of Australia on the battlefields in El Alamein; and Clarence Watego – WW2); his grand-father – (Murray Watego – WW1 and WW2); his grandfather’s brother – great uncle (George Watego – WW1); and his grandfather’s brother-in-law – great uncle (Peter Knowles – WW1).

Col and Neil both initially enlisted into the Army Reserve; however, after Neil completed his tenure and discharged, Col continued to serve and eventually transferred to the Australian Regular Army (ARA) continuing to serve in Artillery in full-time Service. In March 2012, Col separated from the Regular Army, and again transferred into the Active Army Reserve where he still continues to serve today. During Col’s Military Service Col’s youngest brother (Lloyd Watego – 17 years his junior) also enlisted and served with pride in the Australian Regular Army, discharging after 7 years of Military Service.

To date, Col still continues to serve after 42 x years of continuous Military Service in the Australian Defence Force as a “Gunner’’, although he is currently posted to a non-Corps posting.

In 1999 Col deployed to East Timor with “Ä” Field Battery RAA and upon his return to Australia in 2000, he was appointed as the Regimental Sergeant Major (RSM) of the 8th/12th Medium Regiment – Royal Regiment of Australian Artillery. A significant highlight of Col’s Military career was to wear the same Colour Patch on his hat – which his father (as a Gunner) wore on his shoulder, when his Father Col Senior served in the Second World War.

The ADF IPRC delivered Defence and non-Defence training to young Aboriginal and Torres Strait Islander men and women from Communities across the width and breath of Australia from 2008 to 2016. Today Navy, Army and Air Force Indigenous Programs have proven to be pivotal in providing high-quality training to encourage, empower, and propel young Indigenous Australians into the ADF as a challenging but rewarding long-term career, to Serve Country.

In July 2015 Warrant Officer Watego was presented the Federation Star which he considered a prodigious honour for recognition of 40 years of continuous service to Defence; however, his most memorable experience as a proud Indigenous Australian Soldier, was as the “Honouring Warrior Spirit Ceremony”, Honour Guard Commander; at the inaugural Indigenous Military Ceremony at ANZAC Cove Gallipoli, where with 7 other Indigenous Australian Soldiers, together paid respect and acknowledged the sacrifice of all Warriors and in particular the Warrior Spirit of all of our Indigenous ancestors before us.

In 2016, Warrant Officer Watego was extremely honoured to be acknowledged on the Queen’s Honour’s List 2016, “For meritorious service to Indigenous Affairs in the Australian Defence Force”, and be presented the Medal of the Order of Australia, in the Military Division.

When not training young Aboriginal and Torres Strait Islander men and women for possible pathways into the Australian Defence Force or Australian Public Service; Col’s Organisation called TRYP Consultancy Pty Ltd (To Reach Your Potential) conducts Youth Leadership and Teambuilding Development and Training Programs, based on a modified Defence Force Recruit Training Model. The outcomes sort by TRYP in partnership with other Organisation which are like-minded, is to deliver foundational life-skills, leadership and teambuilding skills, employability skills, Culture and education; to empower our Youth to become citizens who contribute to Community, in a positive way. In September 2016, in his Community Col was honoured to be named a Paul Harris Fellow by the Rotary Foundation of Rotary International, for his contribution in the assistance and support to Indigenous Youth through his civilian organisation, TRYP Consultancy Pty Ltd.

Col firmly believes that our Youth are our future. That our Youth possess the same Warrior spirit as our ancestors. He believes that it is our responsibility to encourage, mentor and empower our Youth to develop and strengthen their Warrior spirit, so that they too can follow in the footsteps of their Warrior ancestors and become confident and competent citizens who contribute in a positive way, Serving Community and Serving Country.

To live is to serve.

“Never let the fear of failure prevent you from succeeding.”