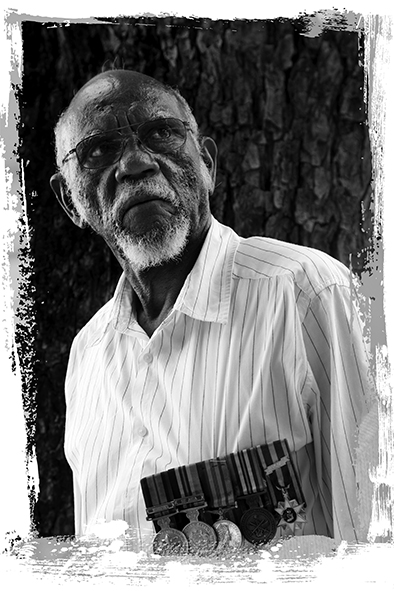 Desmond Mayo was born 1945 in Peterborough, SA.  His mother Gladys Kruger/Ahmat was part of the stolen generation.  He has tribal connections to Muram group, Wadarman group and Wavehill group.
He was called upon to enlist in National Service in Sept 1965 as a young 20 year old lad.  He went to training at Puckapunyal, Victoria and was accepted into the Army.  In December 1965 he joined 3 RAR and then transferred to 4 RAR.

During his time in the army, he served two tours, one in Malaysia (14 months) and one in Vietnam (12months).

It wasn’t always business in the Army, Desmond was a keen sportsman participating in many extracurricular activities during his service, including boxing, basketball and football.

In 1969 he discharged from the army in Brisbane and returned to Darwin where he met his wife Beattie.  They had 4 daughters, Belinda, Justine, Bianca and Peta, today he has 10 grandchildren and 8 great grandchildren.

In 2014 he was asked to be the NT Patron for NAIDOC – Serving Country: Centenary and Beyond. Through his participation in the various NAIDOC events, he built a range of networks and has since gone on to give numerous interviews about his time in the army and growing up in Darwin of which most can be found through a google search. He has helped inform a new exhibition at the Australian War Memorial, “For Country, For Nation”. It shares stories of Aboriginal and Tones Strait Islander experience wartime and peace, including that of Desmond Mayo.

“We formed a bond, their was no racism in the company, a brotherhood and we looked after each other as we had to. We were comrades and mates”