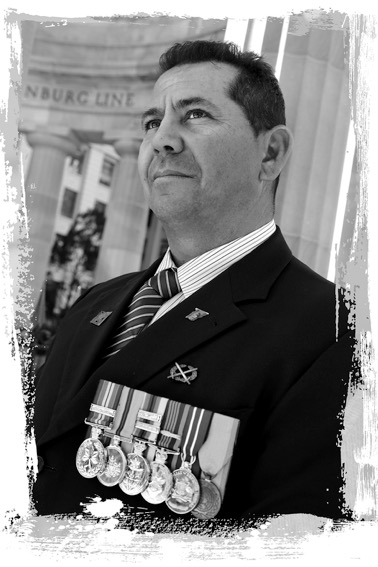 “I enlisted 08 Jan 1986 three months boot camp then employed as a Gun Number ECN 162 posted to 4th Field Regt Mar 1986 108 Field Battery until 1987 posted to 1St Field Regt 101 Field Battery until 1989. Then posted to PEE Graytown as a Gun Number until 1992 then completed Arty Signalman Course ECN 361 then Posted back to 4 Field Regt HQ Battery Then promoted to LBDR. I was there for three months then deployed overseas to the Sahara Desert with the United Nations for nine months Operation Cedilla, 5 ASC MINURSO on completion promoted to BDR. On return I applied for a Corps transfer to Australian Army Aviation, in 1995 handed back rank then posted to 1St Aviation Regt located at Oakey. Posted to 173 Surveillance Sqn Fixed Wing. Then post to HQ 1St Aviation Regt Ops until 1997. Then I was posted to Australian Defence Force Helicopter School as a Ground Instructor and promoted to CPL. In 1999 posted to England for 6 months on exchange EX LongLook. Then I was posted to 1St Aviation Regt to 171 Op Spt, Sqn Ops Cpl, working with the Iroquois Gunships. Then deployed to Op Belise ,Bougainville for three months. I remained at 1St Regt until December 2002. Then I was posted To HQ 16 Bde Army Aviation as the Commanders Driver until the end of 2004. Then posted to 5AVN Regt on promotion to Sgt working with TAG(Tactical Assault Group) East CDO, and Tag West SASR. I complete 20 years ARA. Then was employed as the Head Chauffeur and security for the Governor Of Queensland Quentin Bryce for 18 months, during this time I remained with the reserves as an active member. I was then deployed to Southern Iraq for 7 months as a CIMIC Officer with OWB(4)W Overwatch Battlegroup Number 4 West. We were the last combat troops to be deployed to Southern Iraq I returned home 14 July 2008. I continued to being an active reservist working at Army recruiting as a recruiting Sgt, and as a relief driver security for the Deputy Premier the Hon Paul Lucas, Minister Kate Jones, and Neil Roberts.” – Lee Sinn

“They came before us when country didn’t acknowledge us, but as a race we excelled as exceptional and feared soldiers.”