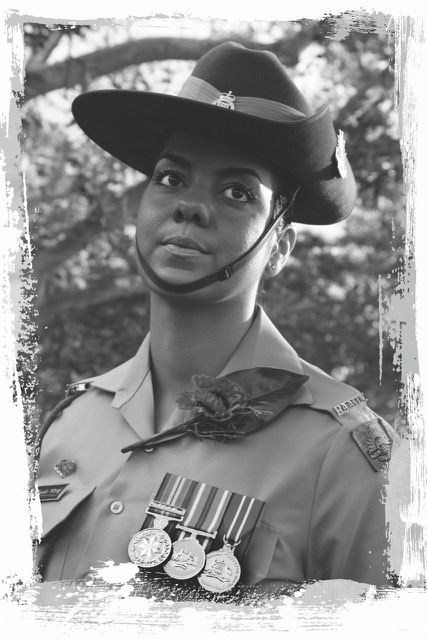 “I was born in North QLD in Townsville in 1988 on a small town outside of Charters Towers. I am from the Olkolo people from the Cape York Region. I joined the Army when I was twenty years old in 2009. I have been posted to 10 Force Support Battalion for three years and then 1 Combat Service Support Battalion for two years in 2013. I spent 8 month overseas at Al Minhad Airbase in Dubai working with Navy and Airforce personnel. Since being in the service I have travelled to every sate in Australia except Tasmania. Best thing about being in the Army is meeting people from all walks of life and especially being able to interact with other soldiers from different nations. This is my seventh year in the Armed Forces and I am now currently working as an Aboriginal Liaisons for candidates at the Defence Force Recruiting Centre in Parramatta.”

“One thing I’ve learned in the military is that even though we all wear the green a soldier is never socially colour blind. You are judged by your merits, by your behaviour and the way you represent your organisation, your unit and your fellow soldiers. Not your background. The enemy will kill indiscriminately therefore one cannot afford to be socially prejudice, such is the nature of the beast. How ironic is it that the Army life should offer more social equality and acceptance then the civilian world.”