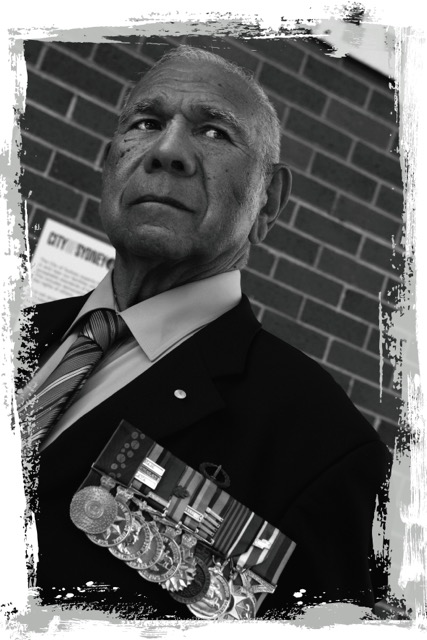 Military Awards
Medal of the Order of Australia (Military Division) (1987)

On 25 April 1969, during Operation Surfside in Phuoc Tuy Province, Corporal Mundine was the leading Section Commander with 1 Platoon, A Company. On approaching a suspected enemy area, Corporal Mundine deployed his section on the ground and moved forward alone to reconnoitre the enemy position. He sighted enemy bunkers and was about to signal further instructions when he detonated a mine that severed his lower right leg and caused severe wounds to his back and his other leg. Members of his section started to move forward to his assistance into what was later shown to be an enemy minefield. Corporal Mundine, although in considerable pain, ordered his section to stay out of the area and directed them to new fire positions after giving full details of the enemy bunker system. For over forty minutes he continued to give instructions to his section and refused to allow any members of the platoon to move near him until engineers had cleared path through the minefield. This occasion was typical of his outstanding leadership. He was mentioned in dispatches (MID) in 1969.

Roy received an OAM Military for his 36 years of serving with distinction in the armed services. His old battalion, the 5th Battalion, named a military operation in Afghanistan after him “Operation Mundine”.

When you serve, you place the needs and safety of others before your own.

“In South Vietnam he was wounded, more dead than alive, only Zeke had the strength and the will to survive.As a young soldier’s mentor, none were finer than he. I salute you Roy Mundine, you’re a legend to me.”

– From a poem by Bill Charlton, a young soldier mentored by Roy (2013)