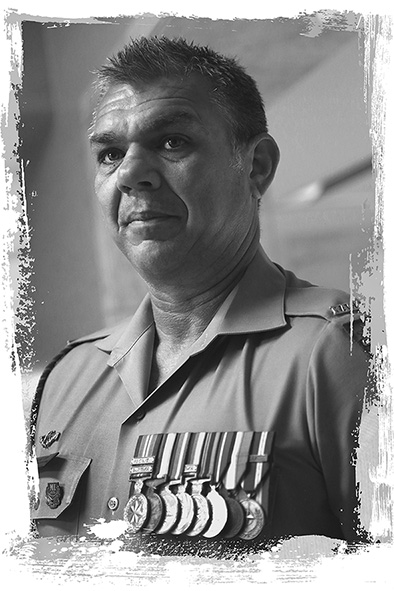 Warrant Officer Class Two Shane Cox (Burns) is of mixed heritage he has a non-Indigenous Mother and an Indigenous Father and he holds both cultures close to his heart. He is a Kamilari man, who are Murri people who are from the area which extended from around Singleton in the Hunter Valley through to the Warrumbungle Mountains in the west and up through the present-day centres of Quirindi, Gunnedah, Tamworth, Narrabri, Walgett, Moree, Lightning Ridge and Mungindi in New South Wales, to Nindigully in south west Queensland. The Kamilaroi is one of the four largest indigenous nations in Australia. The Kamilaroi language is classified in the Pama–Nyungan family of Australian languages.

Shane left school at 16 year old and set off on several adventures working odd jobs around the country, ending up in far north Western Australian working as a Mechanic’s Trade Assistant for a large fishing company. At 20, he thought it was time to follow his dream to join the Australian Defence Force. So, he left his employment, jumped on a bus and headed to Perth WA. After successfully completing the recruiting process he enlisted into the Australian Regular Army 24 April 1995 and upon completing his recruit and initial employment training as a Rifleman, he was posted to The 1st Battalion, The Royal Australian Regiment Townsville. After several years, and life changes, he transferred to The Royal Australian Corp of Transport.

The Army has given me the opportunity to travel all over Australia and the world. I lived in many different cities and towns across Australia and abroad, this includes Brisbane, Townsville, Sydney, Newcastle, Puckapunyal, Malaysia, and the Middle East.

Some of his most memorial achievements have been to serve my country on Operational deployments. These deployments have seen me work with other countries including the US Army, US Marine Corps, British, Canadian and New Zealand Armies. I have been fortunate to serve my country on several Operational Deployments: INTERFET, East Timor 1999-2000 when I was a Private, OP Citadel, East Timor 2004, as a Corporal and Sergeant, OP Slipper, deploying to Kuwait, United Arab Emirates and Kabul, Afghanistan. In 1996 and 2012, I was also lucky enough to conduct tours of Rifle Company Butterworth, Malaysia.