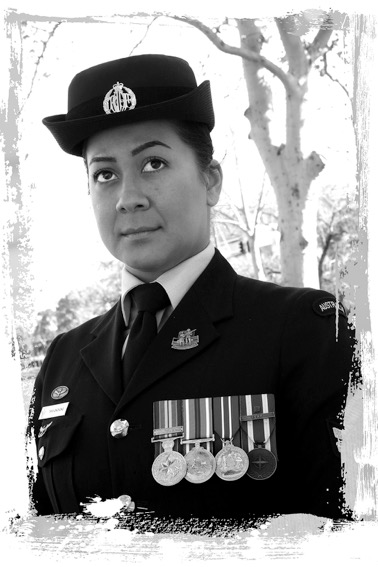 Tara’s family has a proud ANZAC military history, both of her grandfathers saw active service in the Army, her grandmother and great grandmother served as nurses in the Women’s Auxiliary Air Force as well as many other family members serving across the services for both Australia and New Zealand. Tara was born in Bowen QLD, the eldest of two children. Her father Mick joined the Air Force shortly after she was born and is still serving. Tara’s younger brother Jason enlisted a few months ahead of her into the Army. Her mother Trish also works for Defence as an Australian Public Servant. When they were kids, Trish used to take Jason and Tara to watch Mick march in various parades and there was always a huge sense of pride especially on ANZAC Day lining the streets waving our flags and seeing their Dad march past in uniform. Tara enlisted into the RAAF from Brisbane QLD at 23 years old as a Geospatial Imagery Intelligence Analyst – now called Air Intelligence Analyst (AIA-GEOINT). Her recruit training was completed at RAAF Base Wagga NSW and initial employment training at the Defence Intelligence Training Centre in Canungra QLD. Since completing my training Tara has been posted to multiple units at RAAF Base Amberley QLD and RAAF Base Edinburgh SA as well as an attachment to a United States Air Force squadron in Hawaii and two deployments to Afghanistan. Tara’s duties vary with each posting, some of her primary duties have included mission planning for the F-111 jets before they retired, training members for deployments over to Afghanistan, analysing imagery and Full Motion Video from Remotely Piloted Aircraft (RPA) and helping to stand up a new Intelligence Surveillance and Reconnaissance capability within Air Force. Tara has also participated in multi-national exercises around Australia. Tara is currently transitioning into a new role outside of her mustering and will be working for Aboriginal and Torres Strait Islander Affairs – Air Force.
The biggest highlight of Tara’s career was deploying on Operation Slipper in the Middle East and being there the same time as both her Dad (Force Communications Unit – Al Minhad Air Base) and Brother (Mentoring Task Force – Forward Operating Base Wali). awareness initiatives.

“It is because of my love for my family and my country that I can go away and do what I do and no matter where I go, they always calls me back home.”