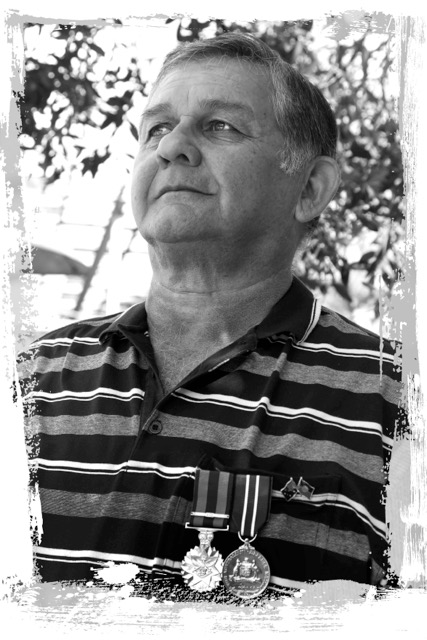 Mick joined the Royal Australian Air Force on 29 July 1968 and retired as a Warrant Officer on 25 August 1989.

Mick served 21-years in the RAAF at a number of different postings before spending 26-years with various NSW Government agencies. Some might say he was nomadic while others would say he just kept going walkabout.

In his first several months in the RAAF he completed his recruit training at RAAF Edinburgh SA before doing his Supply Clerk training at RAAF Wagga Wagga NSW. His first real posting was to No. 2 Aircraft Depot at RAAF Richmond NSW as an Aircraftsman in 1969. Mick then attempted to get an overseas posting to Vietnam or Malaysia. Luckily, after just one-year he was reclassified as a Leading Aircraftsman and posted to 478 Maintenance Squadron at RAAF Butterworth Malaysia for two-years. Mick was then promoted to Corporal and posted to Base Squadron at RAAF Pearce, WA in 1972. This is where he met Kaye and they married in 1973. Late 1974 he was promoted to Sergeant and posted back to 2AD RAAF Richmond. During the next five-years he gained much valuable experience and his sons (Greg and Stephen) were born. He was posted to Canberra ACT in 1980 to work on the 707 Project where the first two Boeing 707 Aircraft formed the RAAF VIP Fleet. After three-years Mick was promoted to Flight Sergeant and posted to Melbourne to work on the project where six Squirrel Helicopters were purchased from France. In early 1985 Mick was promoted to Warrant Officer and posted to Philadelphia in Pennsylvania USA. He spent three-years working with the US Navy and Army obtaining spares for our P3 Orion Maritime Aircraft and Iroquois Helicopters. Mid 1988 Mick was posted to Sydney where he spent his last year in the RAAF.

Mick then spent 26-years working for various NSW Government Agencies. He worked for NSW Health with Central Coast Health for 14-years before stints with the Department of Community Services (2-years), WorkCover NSW (4-years), NSW Premier and Cabinet (1-year) and NSW Fair Trading (1-year). He then returned to NSW Health as the Manager of the Nunyara Aboriginal Health Unit with Central Coast Local Health District in September 2012. He retired in March 2016 but is still active in the Central Coast Aboriginal community.

I repeat, I encourage any young Aboriginal or Torres Strait Islander to consider the Defence Forces as a career as it gave me a wealth of skills and a series of wonderful adventures.

‘I joined the RAAF to ‘get out of town’ as I saw no future there for me. However, I had a most wonderful and exciting career. I would have stayed-on for many years more but my wife and I wanted our children to be able to complete high school in one school. I would encourage any young Aboriginal or Torres Strait Islander to consider the Defence Forces as a career option as it gave me a wealth of skills and a series of wonderful adventures’