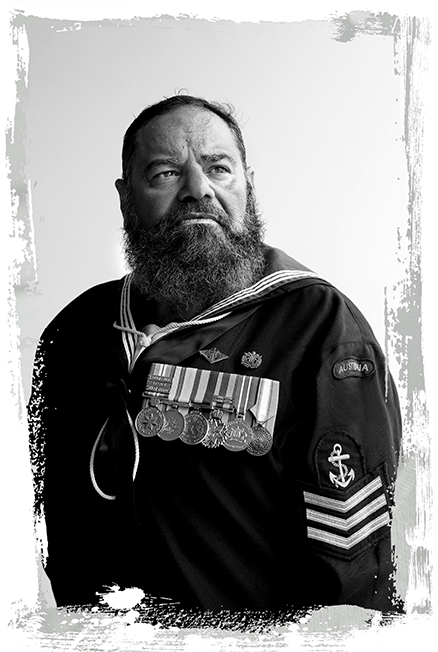 ‘I joined the Royal Australian Navy at the age of 15. straight from year 11, I started at HMAS Leeuwin in Fremantle as a Junior recruit where we were uniformed school kids doing both Naval subjects and finishing school, I graduated from there and went to HMAS Cerberus in Victoria where I completed my selected category of Weapons Mechanic as a member of the Navy’s Gunnery branch.  I first went to sea on HMAS Torrens as a 16 year old, it was a 2 year posting during which time I also completed a Ship’s Divers course. I posted onto HMAS Jervis Bay for a further year until I was posted to HMAS Waterhen in Sydney, I was seconded to TRV’S (Torpedo recovery vessels) where as a cuff rate diver I was the swimmer for all practice torpedo firings conducted 30-40 kms offshore, I then was transferred to DTV’s (Diver Training Vessels) where we took trainee Clearance Divers to all places as part of their course.  I then was posted to HMAS Swan in dry dock at Williamstown in Victoria, it was here my career stalled after a serious car accident which landed me in hospital for 7 months and approx 4 years of rebuilding back at HMAS Cerberus Naval Hospital, I spent time on HMAS Warrnambool (patrol boat) as a fitness sea readiness check, from there I posted onto HMAS Hobart (Guided Missile Destroyer) for 3 years and then onto HMAS Success a Fleet Tanker for a year.

I came ashore for a year then posted back onboard HMAS Hobart for another 3 years, from there I was posted to the Army Movement Cell (PMCC) at Victoria barracks in Paddington NSW for a year, I was posted to HMAS Cairns as buffer on the newly re-commissioned HMAS Wewak (Landing Craft Heavy) in preparation for the East Timor crisis, this was a year long posting, then from there back to HMAS Cairns where I was seconded to HMAS Ipswich (patrol boat) and also being sent to Sydney to go aboard HMAS Kanimbla for operations off Christmas Island, I came back to Cairns until I was posted back to Victoria to join HMAS Stuart (Anzac Class Frigate).

It was on this ship that in 2004 I was part on the International Coalition Against Terrorism taskforce and spent 6 months in the Persian Gulf where I spent a lot of the time as boat driver taking Boarding Parties to the multiple ships anchored in the Gulf, part of this job also required working with both Iraqi and Kuwaiti forces, I decided after this that 26 years service was enough for me and was posted to HMAS Kuttabul in Sydney where I finished up my time in the service and that’s it in a nutshell’