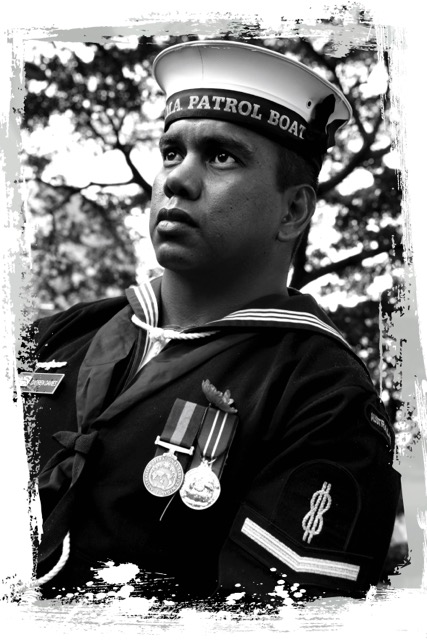 “I served In the Royal Australian Navy for 6 years. I Joined 5th May 2008 and completed my basic and category training at HMAS Cerberus, Crib Point (Melbourne) to become a Boatswains Mate (Seamanship and Gunnery Sailor). On completion of my training I was based at HMAS Coonawarra (Darwin), HMAS Cairns (Cairns) and HMAS Kuttabul (Sydney). I worked and trained on following Class Ships; (LCH) HMAS Balikpapan, (ACPB) Patrol Boats HMAS Armidale/ Pirie, (HS) Hydrographic Ships, HMAS Choules (Supply ship), HMAS Newcastle (FFG) and (ACPB) HMAS BROOME/MAITLAND. The people who influenced me the most in Joining defence was my Father Frederick Reys, who served in the 51st Battalion B Company, 1st Intake National Service 1951 Wacol Camp Brisbane and my Mother Valerie Davies whom is a retired Nurse. Others that Influenced me was Family Members, friends of family that served defence and friends I grew up with that joined the services. 6 years in Defence I learnt alot about myself and about others. I experienced alot of travelling and definitely trained me well for challenges in life that I was going to be faced with. Overall it gave me life experiences and gave me professional training and life skills that I now obtain. Im currently discharged from the Navy 31st Aug 2014 and currently studying social work at James Cook University. Great opportunity whilst serving in Royal Australian Navy was to be able share my Indigenous Culture as well as represent the Navy. I played an important role among others being apart of Royal Australian Navy first ever Indigenous Dance group Bungaree which performed at the International Fleet Review 2013 at Opera House and Being the first ever Indigenous Serviceman to play the didgeridoo at opening of the Dawn Service Canberra AWM in front of the Royal Family.”

‘Being apart of the Australian Defence Force and Royal Australian Navy was a very Proud, Honorable feeling for me. A very positive, confident outlook and best of all it helped me to encourage and inspire others’