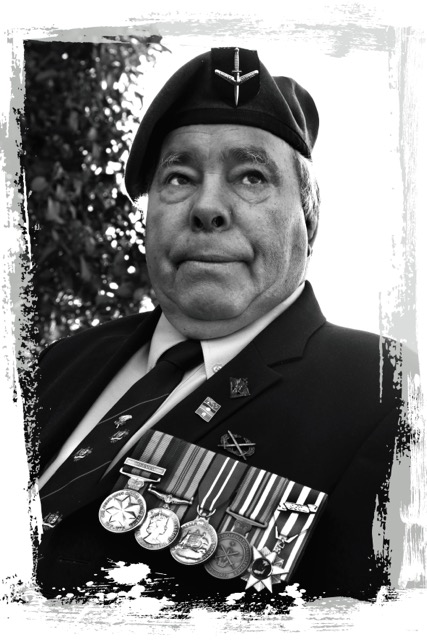 John Kinsela is a proud Wiradjuri & Jawoyn descendent. He was born in Surry Hills in Sydney in 1949. John Kinsela is the nephew of Australia’s most famous Aboriginal and Torres Strait Islander soldier – Captain Reginald Saunders MBE – who was the first commissioned Aboriginal officer in the Australian Army. As such, he did much to dismantle the racist assumptions about Aboriginal people in the army.

John left school at just 14. At 19, he became the first Aboriginal and Torres Strait Islander to compete internationally in wrestling in the 1968 Mexico Olympics. Twelve months later, he found himself conscripted for National Service in Vietnam serving from 1970 – 71 as a Gunner in the 4th Field Regiment 106 Battery of the Royal Australian Artillery.

Upon his return, John wanted to pick up his wrestling career – and was selected once more to represent Australia in wrestling at the ill-fated 1972 Munich Olympics. He recalls a different sort of gunfire there, that which cost the lives of eleven Israeli athletes. In 1978, he re enlisted in the Army Reserves and became a Corporal in the Commando Unit. In 1981 he was awarded the Commando of the Year, before retiring in 1984.

John has continues to be active in the sport of Wrestling, and has been a mentor for Aboriginal wrestlers Blake Barden, Shane Parker and Stephan Jaeggi.

“I got to represent my country twice: in Vietnam and in the Olympics.”