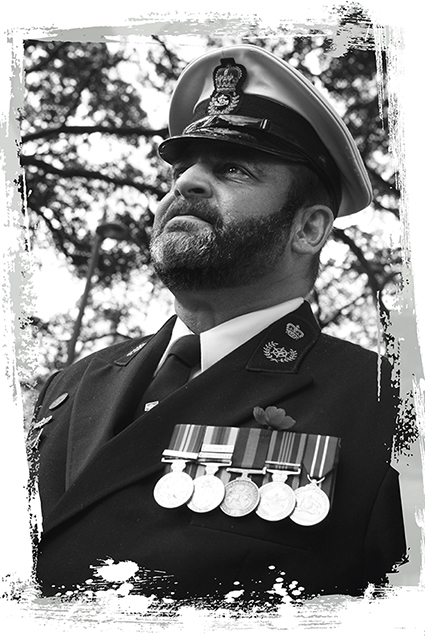 Chief Petty Officer Ray Rosendale was born in Nambour, QLD in 1965. He is a Kuku Yalanji man of the Western Sunset Clan, whose traditional lands are situated north-west of Cairns in Far North Queensland. Chief Rosendale worked throughout Queensland as a stockman, apprentice mechanic and Federal Public Servant before joining the Navy in 1991.

Initially joining as a Quartermaster Gunner before transferring to Fire Fighter in 1994 and then to Naval Police Coxswain in 1996, Chief Rosendale has served in Her Majesties Australian Ships CANBERRA, WHYALLA, SHEPPARTON, IPSWICH, TARAKAN, DARWIN and HYDROGRAPHIC SURVEY CREW RED.

Chief Petty Officer Rosendale has served as the Senior Naval Police Coxswain in HMAS WATSON and CAIRNS and was the Navy instructor at the Service Police School at Holsworthy NSW in 2007. In 2009 he posted to Defence Indigenous Affairs as the Indigenous Community Engagement Officer for Northern Australia as well as an advisor and mentor for the Defence Indigenous Development Program, which assists disadvantaged youth from Indigenous communities prepare for a career in the Australian Defence Force.

In January 2013 then Chief of Navy, Vice Admiral Griggs, appointed Chief Petty Officer Rosendale to his current position as the Navy Strategic Advisor on Indigenous Cultural Affairs. This appointment is the first opportunity for an Indigenous serving member to hold a permanent position directly related to Indigenous affairs within the Australian Defence Force.

Chief Petty Officer Rosendale has been married to Anna for 21 years and they have two teenage children, Hayley 19 and Daniel 16 at the time of this portrait. He is a self confessed Rugby tragic with a love of adventure, crime and science fiction novels.

“I am very humbled and proud to have served both my country and my people. To be selected as the Navy Strategic Advisor on Indigenous Cultural Affairs to the Chief of Navy has ben the highpoint of my career. I am the first non-commissioned officer to be appointed to a Service Chief and the only appointed Indigenous Advisor in the ADF. This has allowed me to assist Navy to become an employer of choice in the recruitment and retention of Aboriginal and Torres Strait Island people.”