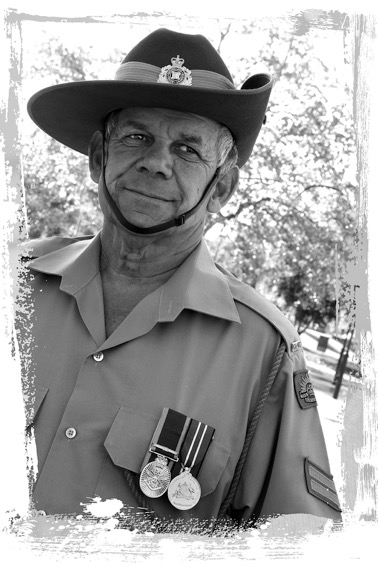 “I am an Army Reserve member, I joined the reserve on 7 July 1981 until I discharged in January 2003 after 22 years service. During that time I discharged as a Sargent, qualified for Warrant Officer Class 2. I served with the following Battalions; 25th Battalion Royal Queensland Regiment, 25/49 Battalion Royal Queensland Regiment as a rifleman. In Brisbane I was a Platoon Sargent with the Officer Cadet Training Group. On 25th August 2009, I re-enlisted as a Corporal in the Army Reserve. Now I am working with Australian Defence Force on the Indigenous Pre-Recruitment Course.” – Glen Waters

‘I think its our duty to serve our Country. I come from an Aboriginal family where members have provided service to our Country, including Warrant Officer Leonard Waters, a Queenslander, who was the first Indigenous Australian to earn his ‘wings’ as a pilot. During 1944-45, Waters served in 78 Squadron RAAF, flying Kittyhawk fighters in Dutch New Guinea, Morotai and Borneo, bombing and strafing Japanese positions. Appropriately, his Kittyhawk was named ‘Black Magic.”