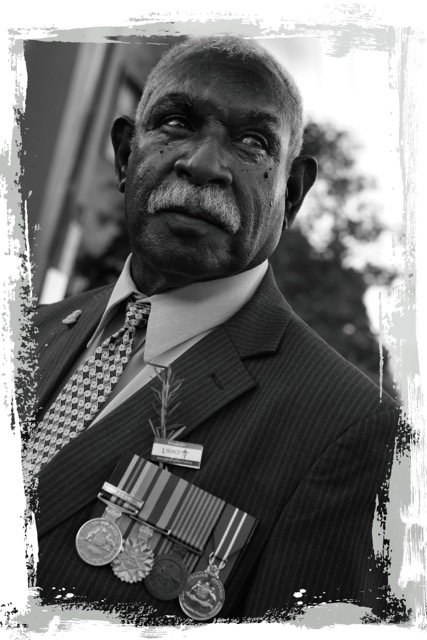 Beimop Tapim is a proud Dauareb man from Mer Island in the Torres Strait Islands and the youngest of thirteen children. During his final year of school on Thursday Island, the HMAS Gascoyne anchored in the harbour. With three months and not even yet 18, Beimop enlisted in the Royal Australian Navy in January 1966. In doing this he also followed in the footsteps of his Uncle who joined the army in WW2 and two elder brothers who joined and fought in WW2.

In 1974, he was a part of Operation Navy Help Darwin was a disaster relief operation initiated by the Royal Australian Navy (RAN) following the destruction of Darwin, Northern Territory by Cyclone Tracy during the night of 24-25 December 1974. 13 ships, 11 aircraft, and 3,000 personnel were sent to Darwin in the largest disaster relief operation undertaken by the RAN in its history. The RAN task force was present from 31 December 1974 to 31 January 1975. Beimop also participated in the Rim of the Pacific Exercise, which is the world’s largest international maritime warfare exercise. RIMPAC is held biennially since 1971 and is hosted and administered by the United States Navy’s Pacific Fleet, headquartered at Pearl Harbor, in conjunction with the Marine Corps, the Coast Guard, and Hawaii National Guardforces under the control of the Governor of Hawaii.

In 1981 he received The National Medal, awarded for diligent long service to the community in hazardous circumstances, including in times of emergency and national disaster, in direct protection of life and property. Beimop’s eldest son, who is also called Beimop is a Lieutenant Medical Officer in the RAN. Lieutenant Tapim is currently serving on the HMAS Darwin which is assigned to the Combined Maritime Forces to conduct maritime security operations in the (Middle Eastern Area of Operations) Arabian Sea, Red Sea, Gulf of Aden, Gulf of Oman and Indian Ocean.

“The program that runs currently to help Aboriginal and Torres Strait Islander kids joining the Navy gives them a great chance in life to learn skills, and at the core, most importantly, discipline . I hope all the new recruits have a great sail through their career.”