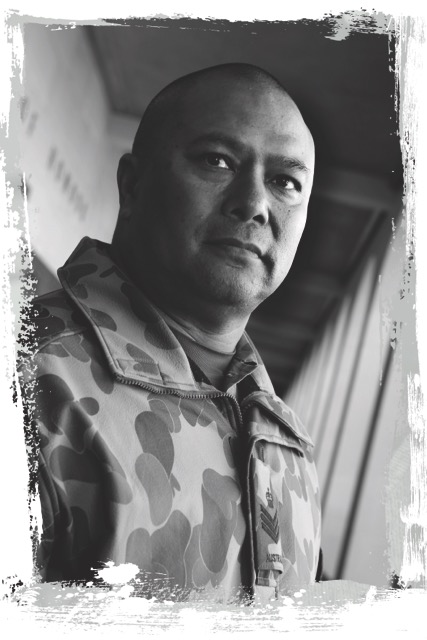 “After completing a four year Electrical apprenticeship in Bowen QLD, I joimed the RAAF as a Barracks Electrician. In 1991 I remustered to a Radio Technician Ground Systems (CE TECH). My primrary role has been to maintain communications systems that enable the RAAF to safely, efficiently and profienclty deliver capability. I work on Airfiled, Satelite and HF communication systems. In my role as CE Tech, I have been to places like the Cocos Islands (twice) Malaysia (twice) Melbourne, Perth Townsville. Brisbane, Katherine, and Canberrra. For a small town country Lad, I am thankful that Defence has given me an opportunity of seeing most of Australia and other over seas countries whilst doing my job. I have had two deployments, the first to the Solomon Islands in a peace keeping role, providing the Government of the Solomom Islands stability in order to rebuild. This deployment was very personally rewarding. My unit provided a local school with new facilities that would enable them to deliver education to their students more safely and comfortably. For my second deployment in November 2011, I deployed to the Middle East Area of Operation (MEAO) where I deployed with Force Communications Unit (FCU) in support of Operation Slipper. During this time I had the honor and privilege of deploying with both my children. Flying out tothe MEAO on the same aircraft with me was my daughter Tara(RAAF), who was based at Kandahar Airfield with the Herron Detachment. My son Jason (Army) then deployed into theatre in 2012 and was based at FOB Wali, near Tarrin Kowt as part of the Mentoring Task Force Group. During Both my deployments, I have had the privilege of celebrating Anzac Day on these foreign lands. It has been a time of reflection and thought of how Serviceman and women, past present and future, have and will contribute to our Nations security and that is something I am very proud of.” – Mick Enchong

“Defence will challenge you individually, physically, emotionally intellectually and culturally. But the challenges are there for you to meet and I urge everyone to take that challenge.”