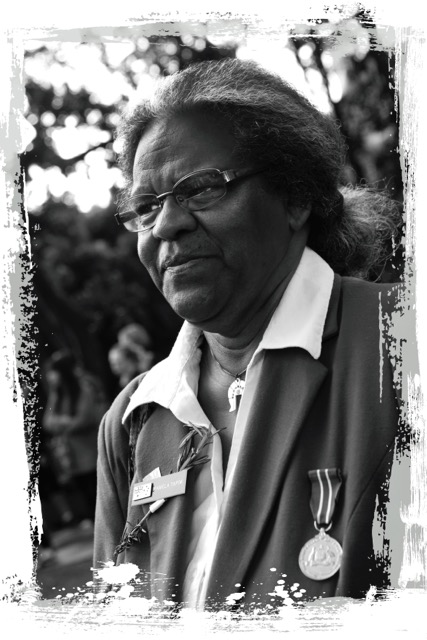 “When I finished High School in 1969, jobs on Thursday Island were hard to get. When the three Forces, Navy, Army and Airforce came to Thursday Island, I made up my mind to join the Navy. I wanted to follow in the footsteps of my older brother Phillip, who, with another Torres Strait Islander man, Mr N Bon, were the first to join in 1965. Myself and another girl, Frances Ahmat (Choppy), went to the Town Hall to join. I passed the exams, and then I had one more obstacle to to clear – HEIGHT – You had to be a certain height to get into the Navy. Well, how did I overcome this? I made it through thanks to my ‘Afro’ hair and planning. I grew a few inches to reach the required height becaues of my hair style. I passed, and I was in the Wrans ‘Women Royal Australian Naval Service’ I was in Gladstone QLD when I got two telegrams. One from the Navy and one from my Grandmother, Josephine Galora. The Navy said the time and date of my travel and my Grandma’s telegram said “GO”. So my journey began on 5 November 1970. I caught the train to Brisbane to be sworn in on the 6 November 1970, along with my friend Frances Ahmat and the other ladies. We then continued our way by train to the Navy Base HMAS CERBERUS, Victoria and did three months training. My first posting was HMAS HARMAN in Canberra. I served there six months in the Wardroon, as an Officers Steward. While at Harman, I would do trips to Sydney to meet up with the Navy boys from Torres Strait at ‘Johnies’, and that is where I met my future husband, Naval Airman Tapim. He was stationed at HMAS Albatross Nowra. My next posting was HMAS Albatross. I was stationed there from 19 Setpetmebr 1971 for twelve years till April 1983. With our son Beimop, we moved to Cairns and stayed three years before moving to Murray Island. My years with the WRANS was an eyeopener, meeting different people and challenges everyday. I learnt respect and gave respect in our jobs. In my time in the Navy, ‘Wrans’ weren’t allowed on ships. In the Navy today, the Wrans take their place on the ships, get to see different places and have more job oppotunities. Most of all, they work along side as one with Officers and Sailors. I am proud to see more Torres Strait Islanders, both men and women, joining the Navy and seeing them getting involved with the DIDP Navy Programme under the watchful eyes of Warrant Officer Don Bowie (Army) , my brother and also my cousin Chief Petty Officer Jerry Savage.”