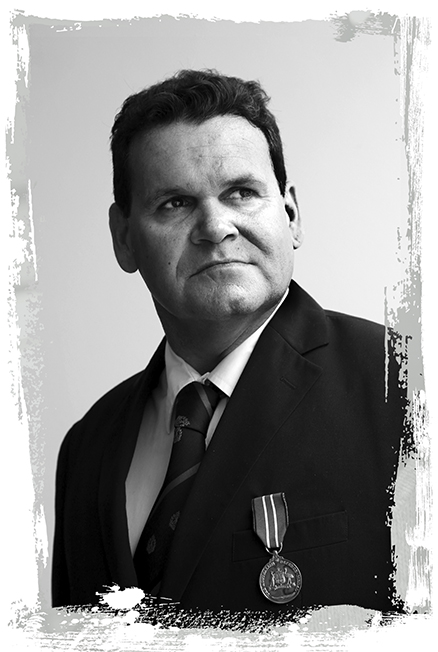 “My great grandmother was Kate Saunders and my mother grew up in Woorabinda. My father came from Scotland and I’m the second youngest of 4 children. I was born in Cairns Qld in 1970 and lived there for the first 4 years of my life before moving to Nhulunbuy in the NT when my father got a job at the mine there, we were there for 12 years before moving to Perth in 1986. We lived in Perth for about 1 year before dad got a job at Tom Price in the Pilbara region of WA. I started my working life here, it was a pretty wild place in the mid to late ’80’s.

In 1991 I started studying at Edith Cowan University in Mount Lawley when my mother suggested I join the Ready Reserve, which was a new thing then ( 1 year full time Army, 4 years part time and they pay for your university education ). I enlisted on the 12th of Janurary 1992 and was sent to Infantry. I had such a great time doing this that I transferred to the ARA at the end of my full time year and decided this is what I wanted to do, not university.

When I transferred to the ARA I was sent to Townsville, I saw this as a positive as this was the sharp end of the Army as far as I was concerned. If I was ever going to get a deployment overseas, it was going to be from Townsville. Upon arriving in Townsville I was posted to 2/4 RAR and went to 9 Pl C coy as a rifleman. I remember everyone was out on exercise so I was stuck with store duties, kitchen duties and other great tasks. Such is the joy of being the new bloke and not knowing anyone. When the blokes returned I introduced myself and they took me in, which was awesome. I still keep in touch with some of those blokes to this day.

Training was good, hard, relevent and most of all explained properly why you were being taught what you were learning, and I had a lot to learn but I managed to get though it without stuffing up too much. After 12 months in a rifle company I put in for a transfer to Support company and was posted to Mortar platoon ( Maggots ). The learning started all over again, but I had a couple of good mates in my section and more importantly I was on their tube. In 1995 during exercise K95 myself and my number 1 of our tube got bitten by a snake on Groote Eylandt and casevaced back to Nhulunbuy by Blackhawk for treatment. Turned out to be a python, but it was good to see that the Army pulled out all stops to get us treatment.

I started to get itchy feet again and put in for a posting to Pipes & Drum platoon as a trainee/ learner drummer. I took to it like a duck to water as I’ve always been fascinated by drums. I was there for less than 2 years when I won the drummer of the Regiment at the annual Pipes & Drums competition held in Singleton NSW.

In 1998, I decided that I wanted to do something else as I was starting to get bored with the repetivness of battalion life so I discharged on the 2nd of August back here in Perth.

I went into mining/ construction and have been doing this since leaving the Army. I am currently working at Argyle Diamond mine as a Crane operator/ scaffolder. I enjoy the outdoor physical work, but like all things time catches up so I’m looking at a diffent direction and going to have a look at safety and training so I can pass on what I’ve learnt.”

“Very proud to have done my bit for my Country”