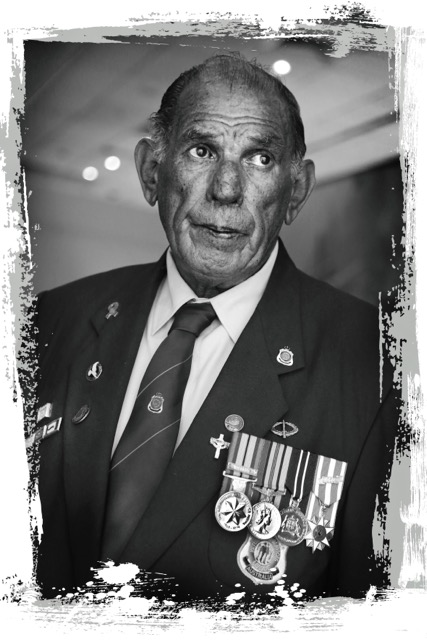 Vic was born in Taree in northern NSW and moved to Sydney when he was just six years old. Vic’s family has a very proud family history of serving in Australian military conflicts. The actions of Private Victor Simon, who served in Vietnam, of Private William Simon, who fought on the Western Front in World War I, Private Toki Simon, one of the Rats of Tobruk who took five bullets before returning to the front line and Private Bob Simon, a prisoner of war in Changi, are a central part of the oral history of the Aboriginal people of northern NSW.

Vic was 19 years old when he enlisted in the Australian Army and fought in the battle of Long Tan in Vietnam. One of the most well-known Australian engagements of the Vietnam War was the Battle of Long Tan, 18 August 1966. The battle saw the action of 108 ANZACS against a Viet Cong (North Vietnamese) force estimated between 1,500 and 2,500. The battle was one of the heaviest conflicts of the Vietnam War as well as one the few battles in the recorded history of the world to be won against such odds.

On 28 May 1968, U.S. President Lyndon B. Johnson awarded the U.S. Presidential Unit Citation to D Company, 6th Battalion, Royal Australian Regiment, for their heroic deeds in the Battle of Long Tan.

To serve is to keep going, despite the odds against you.

“Lost a good mate at Long Tan – Paul Large. We thought the battle was over, just walking around afterwards and he got shot, right between the eyes, right in front of me.”