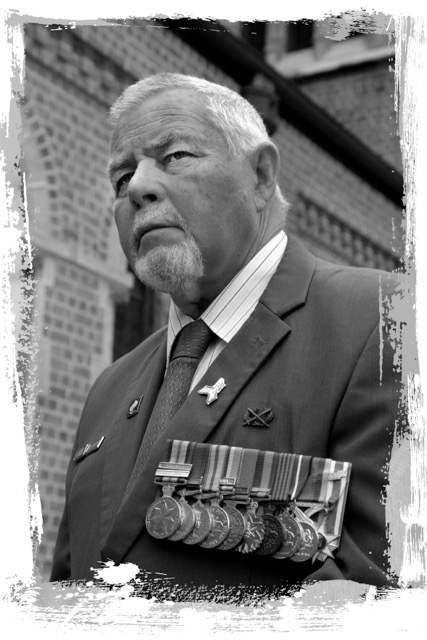 “I enlisted in the Regular Army on the 9th October 1962 with the intention of just serving three years. At the end of recruit training I was posted to the School of Military Engineering to train as a (Sapper) Engineer. As a teenager I thought it exciting to be able to wear the Army uniform, and to be just like my uncles who had served during the wars. I was proud of being a soldier and couldn’t wait to come home on my first leave to show my family the uniform. Little did I know that soon I would be deployed overseas, and would be required to sign on for a further three years? It was December 1964; we were to go to Sabah North Borneo to build roads through the Jungle as Australia’s support to Malaysia during the Indonesian Confrontation. From there I volunteered to go to Vietnam with the first Engineers to be deployed with lRAR. That was September 1965 and by the time we came home in September 1966, we were being ostracized by the Australian public. I felt good about myself though and tried to wear my uniform with the pride I felt for doing a good job, but it was not to be, in public it was required for us to wear civilian clothes. As my six year term was drawing to a close, I got my first promotion and an opportunity to deploy overseas again, so I signed on the dotted line again. This time I was posted to Malaya/Singapore, and being married now I took my wife with me on a two year posting, 1970-72. My daughter was born at the British Military Hospital Singapore. I returned to Australia my son was born in Townsville and I soldiered on until 1985.1 took my discharge from the Army in 1985 after 23 years, and then joined the Ares. In 1991 our Government decided to recognize our service with the Americans in Vietnam by allowing our lRAR Gp to be presented with the United States Army Meritorious Unit Citation 25 yearslate. While in the reserve I trained as a prison officer in Townsville and worked there for some years, until the call to military service had me volunteering for work with the UN in Croatia. That was 1993 and I stayed on there until 1996 completing my tour with the NATO Force. While in Croatia I met my second wife, we married in Croatia on the 4 October 1997. On return to Australia I went back to the prison service now called the Corrective Services, and then in 1999 when my youngest son was born in Townsville I retired. In 2002 we moved to Croatia for 2 and half years. We came home to WA in 2005 and live in Ellenbrook Perth. It is from here that I keep myself busy doing what is considered necessary by my family as an Elder, and my need to contribute to the community. In May 2015 our Government saw fit after 50 years to recognize our lRAR Gp for the award of the Vietnamese Cross of Gallantry Unit Citation with Palm. You may think that I am unhappy with my service, but no I am prouder than ever, just disappointed with our Government for taking so long to recognize our achievements. After leaving the regular army in 1985 I have been awarded 5 more medals and two citations. They look impressive on ANZAC Day and other days for commemoration, but they would look more impressive on the Military Uniform. Military service is not for everyone but those who aspire to serve their country will find great satisfaction from their commitment.” – Frank Mallard 2015

“Serving my country has always been in my mind from the return of my uncles after WW2. This land is our heritage we are a part of it, we hope that our contribution will inspire our politicians to change the constitution to recognise us and to complete Reconciliation.”